Britain to sue the ECB – what will be the point

High quality global journalism requires investment. Please share this article with others using the link below, do not cut & paste the article. See our Ts&Cs and Copyright Policy for more detail. Email ftsales.support@ft.com to buy additional rights. http://www.ft.com/cms/s/0/146a256e-dee1-11e0-9130-00144feabdc0.html#ixzz1XxHR0gKo

Britain is to sue the European Central Bank for setting rules that allegedly handicap the City of London and would force one of the world's largest clearing houses to decamp operations to the euro area.

The unprecedented legal action underlines the depth of ministerial concern over the ECB policy, which comes as the UK engages in a turf war with France and Germany over Europe's financial markets infrastructure.

LSE in bid for majority of clearing house LCH – Sep-02

An ECB policy paper, released in the summer, requires clearing houses to be based in the eurozone if they handle more than 5 per cent of the market in a euro-denominated financial product.

Britain will ask the courts to strike down the rule on the grounds that it restricts the free movement of capital and infringes on the right to establish cross-border businesses across a multicurrency European Union.

The policy, if enforced by the ECB, would undermine London's financial market infrastructure since it would require that clearing houses shift many of their operations to the eurozone – most likely Frankfurt or Paris.

A Treasury spokesperson said: "This decision contravenes European law and fundamental single market principles by preventing the clearing of some financial products outside the Euro area. That is why we have begun proceedings against the European Central Bank through the European Court of Justice."

British diplomats have long feared that Paris was leading attempts to rig market regulations in a bid to shift the centre of gravity for financial services from the City to the continent.

The UK fought off French attempts in recent months to insert into an EU directive a requirement for clearing houses to have access to central bank liquidity – a measure effectively confining most euro-denominated clearing to the eurozone.

The lawsuit is expected to be filed imminently at the European Court of Justice. It is the first case brought against the ECB by Britain.

London is home to LCH.Clearnet, which processes all share trading that takes place on the London Stock Exchange and operates an over-the-counter (OTC) derivatives clearing service, making it one of the largest clearing houses in the world. The clearer also operates a clearing house in Paris, called Clearnet SA.

Clearing houses have assumed heightened importance to maintaining the stability of the financial system due to G20 regulations designed to clean up after the 2008 financial crisis.

The ECB argues that, in the interests of financial stability, it is necessary to locate financial market infrastructure in the eurozone so that crises are not handled by multiple central banks with conflicting interests.

"As a matter of principle, infrastructures that settle euro-denominated payment transactions should settle these transactions in central bank money and be legally incorporated in the euro area," its policy states.

The ECB's policy would immediately hit LCH.Clearnet, since it has a large portfolio of euro-denominated business split between clearing of European government bonds and repos, and euro-denominated over the counter interest rate swaps.

Michael McKee, partner at DLA Piper, a law firm, said: "There would certainly appear to be a prima facie arguable case that any attempt to require a clearing house, located in the EU but outside of the eurozone, to relocate inside the eurozone breaches EU Treaty free movement requirements."

Two US exchange groups, CME Group and IntercontinentalExchange, recently set up clearing houses in London to serve as their beachhead in Europe as they take advantage of post-2008 crisis regulations pushing more clearing of derivatives – instruments in which London acts as Europe's main hub. However their euro denominated business is minimal at this stage.

The ECB policy also said: "Given its mandate to promote the ‘smooth operation for payment systems', the Eurosystem has major concerns with regard to the development of major euro area financial market infrastructures that are located outside of the euro area".

In 2009 a confidential memo by the Banque de France was leaked, in which the bank called for the establishment of a Paris-based clearing house for credit default swaps, a type of derivative instrument, to prevent the business being dominated by London.

Message to the ECB: Act now to avoid a crisis of confidence

Justin Bisseker, European banks analyst, presents his thoughts on exactly what the ECB needs to do, immediately, to avoid a further deterioration in the eurozone.

Recent weeks have seen severe drops in European bank share prices, with the sector acting as a conduit for investor concerns around the safety of eurozone sovereign debt, and the potential for a double-dip in the US and European economies. The moves we have seen have been extreme, to say the least. Quarter-to-date we have seen European bank share prices are down 30% and the broader European equity market down 22%1. This in a quarter which saw the European Banking Authority stress test results, the euro area summit of 21 July (which enhanced the European Financial Stability Facility (EFSF) and sought to improve the sustainability of Greek public finances), and the commencement on 8 August of the ECB buying of Italian and Spanish sovereign debt – all of which were intended by policymakers to reassure markets. 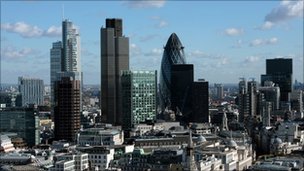 The UK government is taking legal action against the European Central Bank (ECB) over a planned change to European banking rules that could harm the City of London.

The ECB's plans would require clearing houses that handle more than 5% of the market in a euro-denominated financial product to be based in the eurozone.

The Treasury says the move would contravene European law.

It has started proceedings at the European Court of Justice.

A Treasury spokesperson said: "This decision contravenes European law and fundamental single market principles by preventing the clearing of some financial products outside the euro area.

"The government wants to see this resolved swiftly and without involving the courts, but if necessary will not shy away from continuing legal action to make sure there is a level playing field across the EU for British businesses."