Has the Personal Savings Allowance sounded the death knell for the cash ISA?

There are already signs that the impending Personal Savings Allowance (PSA) may have put the death knell for the cash ISA. As we near the start of the official ISA season, when providers used to launch their leading ISA deals, things already looking bleak. Following last years ISA season, one of the worst we’ve known since ISAs began back in 1999, rates are on the decline rather than beginning to battle for the top spot.

Fixed rate Cash ISAs took a dip back in July 2015 shortly after the announcement that the PSA would come into effect in April 2016 and rates have yet to recover, with standard fixed rate bonds overshooting cash ISAs. Where once the fixed rate ISA paid, on average, 0.44% more than fixed rate bonds, today they pay 0.13% less. The question is when better rates are available on standard accounts, why would savers opt for a cash ISA?

If providers are already losing interest in cash ISA savers, savers will shortly follow. If rates don’t improve, there’s little indication that savers will see the point in utilising their cash ISA allowance, even though it is in addition to their Personal Savings Allowance. And where does this leave those with existing cash ISAs, if rates continue to look less appealing?

Currently, savers in the best easy access account, paying 1.55% (with RCI) will breach the PSA with more than £64,516 for a basic rate taxpayer, or £32,258 for a high rate tax payer. However, the current best easy access Cash ISA rate is lower at 1.45%, but savers could have amassed £86,280 in Cash ISAs and that’s not even including interest earned. With average interest included this could be closer to £100,000, fully tax-free. *

Although in the short term, while rates are low, opting to use the PSA before using your Cash ISA may be the better option, but if and when rates do eventually start to rise, the amount at which savers can save tax free will diminish, if they are only utilising the PSA.

How quickly would you breach the PSA is rates were to rise?

Assuming saving in the current best easy access account, the rate was to rise by 0.25% increments the amounts that can be saved before breaching the PSA would be as follows: 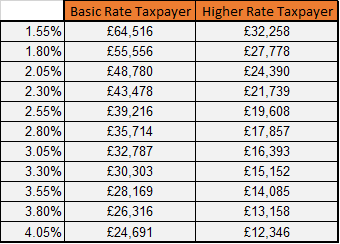 Anna Bowes is one of the founders of Savings Champion a no-nonsense, simple to use website that helps everyone to pick the best savings account for them and then, if they sign up for Rate Tracker, ensures that they could always stay on the best savings rate. She is a regular contributor to the BBC's Money Box and other news programmes as well as the national press, providing expert analysis and commentary on the UK savings market. Anna shares this passion for great savings advice with her long-time colleagues and friends Sue Hannums and Chris Shaw with whom she developed the idea for Savings Champion.

What has happened to markets this year?

One year on from Article 50: What do UK managers think?

Avoiding coal in favour of joules this Christmas

2017: a record-breaking year for global dividends

Will the Japanese stock market stay above the 21,000 hurdle?

Investors behaving badly: five mistakes and tips on how to avoid them

All change in the car industry but how should investors react?

1. The Investment Currency Mechanism, the UK and the Financial Transaction Tax